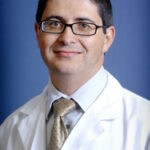 My wife, Nada, and I are proud to call Memphis our home. Nada is a full-time homemaker and stays busy helping raise our three daughters. My family and I enjoy outdoor activities including swimming and soccer. My hobbies include soccer (playing as well as coaching), movies and music.

Born in Lebanon, Dr. Younes completed undergraduate and medical school at the American University of Beirut in Lebanon. He came to the United States in 1993 for an internship in internal medicine at Eastern Virginia Medical School in Norfolk, VA. He also completed a three-year residency there in 1997 and was chief medical resident and an attending physician while there. That same year, he began a fellowship in gastroenterology at The Johns Hopkins University School of Medicine at The Bayview Medical Center, which he finished in 2000.

After his fellowship, he returned to Norfolk to join the Digestive and Liver Disease Specialists. A year later, he arrived in Memphis to begin practicing at Gastroenterology Center of the MidSouth, now Gastro One, and is currently its medical director and director of clinical research.

He was certified in internal medicine by the American Board of Internal Medicine in 1996 and in gastroenterology in 2000.