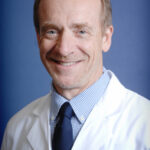 I am the thankful husband of Cindy, my wife of 32 years, dad to three children and “Baba” of four grandchildren. My blessings run deep, extending from my family, church, opportunities to serve and teach in Central Asia and the privilege of sharing in the lives of wonderful patients.

A 1976 graduate of Memphis State University now the University of Memphis, Dr. Taylor attended medical school at the University of Tennessee Health Science Center, where he also completed an internship and residency in internal medicine. He then served as a staff internist at the United States Naval Hospital in Camp Lejeune, NC, for two years. In 1986, he began his Gastroenterology fellowship at the National Naval Medical Center in Bethesda, MD.

After completing the fellowship in gastroenterology in 1988, he became a staff gastroenterologist at the United States Naval Hospital in Portsmouth, VA. In 1991, Dr. Taylor returned to Memphis to practice with Digestive Disease Consultants, and in 1996 he co-founded Gastroenterology Center of the MidSouth, now Gastro One.

He was certified in internal medicine in 1984 by the American Board of Internal Medicine and in gastroenterology in 1989.