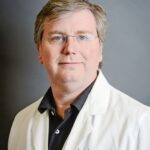 Dr. Jackson was born in Southeast Missouri and raised on the family farm. After graduating from East Prairie High School, he was selected to attend the University of Missouri-Kansas City’s six-year BA/MD program where he graduated with honors. He then completed his Internal Medicine residency and Gastroenterology/Hepatology fellowship at the University of Nebraska Medical Center. While there he gained extensive experience with Endoscopic Ultrasound and gastrointestinal cancers. He has published several abstracts and articles including one book chapter. He has been recognized by the American College of Gastroenterology as an outstanding GI-fellow with their “Fellow-in-Training” Award in 1998. He is an active member of the American College of Gastroenterology and the American Gastrointestinal Association.

Dr. Jackson, and his wife Marsha, and their children, Ty and Morigan, reside in Memphis. Dr. Jackson enjoys listening to and playing classical music, blues, and jazz in his spare time. He also enjoys making his own barbecue sauces and watching Husker football.