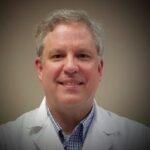 Dr. Steve Threlkeld, the brother of Mike, joined him in practice in 1997.  Dr. Steve graduated magna cum laude from Rhodes College in Memphis where he was a member of Phi Beta Kappa.  He attended medical school at the University of Alabama School of Medicine in Birmingham in 1990 from which he graduated with numerous awards for outstanding achievement.  In addition to an internal medicine residency at UAB, he did his post-graduate training at Harvard Medical School and Massachusetts General Hospital, where he received awards for clinical excellence.   Board certified in infectious disease in 1997 and now managing member of Threlkeld ID, Dr. Steve is currently President (2016) of the medical staff at Baptist Hospital – Memphis and serves as epidemiologist for the hospital and assistant professor for UTCHS.  Married to Ginger and father of two, Dr. Steve loves fishing and spending his spare time with his family.