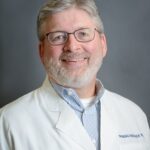 Dr. Frederick is from Nashville, Tennessee. He received his under graduate degree with honors from Middle Tennessee State University in Murfreesboro, Tennessee, before moving to Memphis where he received his M.D. degree from the University of Tennessee Memphis, The Health Science Center. Dr. Frederick completed his internship and residency through the City of Memphis Hospital where he was Chief Resident of Medicine. He is a member of the American College of Physicians, American Medical Association and the Tennessee Society for Gastrointestinal Endoscopists. Dr. Frederick served as an Instructor in the Department of Medicine, Division of Gastroenterology at the University of Tennessee Memphis, The Health Science Center, where he is now Clinical Assistant Professor of Medicine.

Dr. Frederick and his wife, Brenda, have two daughters, Carrie and Casie. Dr. Frederick enjoys hunting in his free time.