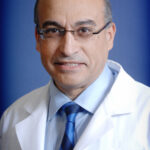 Outside of my busy practice, I enjoy spending time with my family. My wife, Susie, is also a physician, and we are the proud parents of two children. I enjoy bicycle riding, reading the Bible, playing the guitar and playing volleyball.

A native of Cairo, Egypt, Dr. Elsakr studied general biology at Ain-Shams University, School of Science as an undergraduate and then attended medical school at Ain-Shams University, Faculty of Medicine in Cairo, finishing his studies and training there in 1986. He interned there for one year before beginning his residency at St. Barnabas Hospital in Bronx, NY, and later at Eastern Virginia Graduate School of Medicine in Norfolk, VA, where he served as chief resident in internal medicine from 1993-1994 and as assistant professor of medicine from 1994-1995.

In 1995, he began a fellowship in gastroenterology at the University of Tennessee College of Medicine in Memphis, which he completed in 1997. He joined Gastroenterology Center of the MidSouth, now Gastro One, in 1997.

Dr. Elsakr is certified by the American Board of internal medicine in Internal Medicine and gastroenterology.