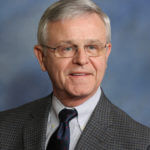 Dr. LaVerne R. Lovell was born and raised in LaHarpe, IL. After joining the Navy in 1969 he attended the United States Naval Academy in Annapolis, MD where he graduated with a bachelor’s degree in Aerospace Engineering in 1975. Subsequent service included duty as an Officer and Engineer on board the fast attack nuclear submarines USS Sargo and USS Dallas. He was then selected to attend the Uniformed Services University of the Health Sciences where he earned his MD in 1986. His training at Bethesda Naval Hospital included an internship in general surgery and a residency in neurosurgery.

After the completion of specialty training, Dr. Lovell became the Neurosurgical Department Head at the U. S. Naval Hospital in Portsmouth, Virginia. In 2000 he completed 30 years of military service and retired at the rank of Captain, USN.

Dr. Lovell has been a board certified neurosurgeon practicing in Memphis, TN since 2000. Prior to joining Semmes Murphey, he and Dr. John D. Brophy were principals in the Brophy & Lovell Neurosurgical Clinic with offices in Memphis, Germantown, Jackson, TN and Batesville, MS. He is a member of the AANS, CNS, and TMA, maintaining licensure in TN, VA, MS, and AR.

He has been married to Margaret (Peggy) since July 5, 1975. They have three children (Kelly, Hunter, and Conrad) and nine grandchildren. Dr. & Mrs. Lovell are members of Christ the King Lutheran Church.