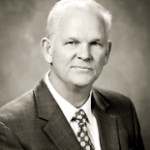 Dr. Jon Hobson Robertson attended Southwestern College (now Rhodes) in Memphis, Tennessee, receiving his BA degree in 1968. He graduated from the University of Tennessee Medical School in 1971. After completing an internship and a year of General Surgery at the City Of Memphis Hospitals, he worked as an ER physician and in general practice for several years before beginning his residency in Neurosurgery in 1975 at the University of Tennessee Center for the Health Sciences.

Each year, the American Association of Neurological Surgeons recognizes a neurosurgeon who has made significant contributions to the neurosurgical specialty through leadership, service and dedication. In April 2013, the AANS bestowed Jon H. Robertson, FAANS, with its highest member honor, the Harvey Cushing Medal.

In addition to his volunteer and academic activities, Dr. Robertson has maintained an active practice in neurological surgery with the Semmes Murphey Neurologic & Spine Institute for the past 35 years. His clinical practice has focused on the surgical management of tumors affecting the cranial base of the skull. Parents of five children and grandparents of twelve, Dr. Robertson and his wife, Carol Ann, have been married for 46 years. Dr. Robertson enjoys fly-fishing and spending time with his family.