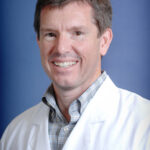 After graduating from Rhodes College in 1982, Dr. Ward attended medical school in Memphis at the University of Tennessee, where he completed his internship, residency and gastroenterology fellowship, finishing in 1993. After his fellowship, he went into private practice as a gastroenterologist in Memphis. Then, in 1996, co-founded Gastroenterology Center of the MidSouth, now Gastro One.

He was certified in internal medicine 1993 by the American Board of Internal Medicine in 1993 and in gastroenterology in 1995.