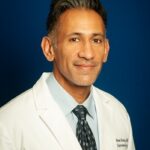 After completion of training, Dr. Farooq served as assistant professor of medicine in the gastroenterology division at U.T. Health Science Center before joining Gastro One in 2010.  Dr. Farooq has authored over ten peer-reviewed publications and invited reviews as well as numerous abstracts and served on the CME Programs committee for the American Society for Gastrointestinal Endoscopy.

Dr. Farooq was an officer for the Tennessee Society of Gastroenterology and Endoscopy beginning in 2011 and served as president 2016-2019.  He also was elected chairman of the Department of Gastroenterology for Methodist-Le Bonheur Healthcare, serving two terms from 2016-2019.  He is also a 2019 graduate of the Methodist Physician Leadership Academy and currently serves on the executive committee for Gastro One as medical director of the ambulatory surgery centers.