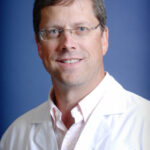 After graduating from the University of North Dakota, Dr. Ormseth spent two years in the Peace Corps teaching math, science and English in Lesotho. In 1988, he entered medical school at Tulane University School of Medicine and received an M.D. in 1992. At Tulane, he was awarded membership in Alpha Omega Alpha, the medical honor society. He then completed an internship and residency in internal medicine at the Madigan Army Medical Center.