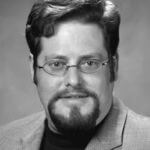 He is married to Shannon Mitchell Arthur, and they live happily in Memphis with their 3 young children, 2 dogs, and 1 cat.